Foods That Heal - “We dig our grave with our teeth.” That’s an old saying that should make you laugh and shudder at the same time, because it's more true than we think.

Modern science is rethinking the value of food beyond simply meeting daily, nutritional requirements.  Research now shows that food can play a role in not only providing better or lesser health, but it can be used to ward off disease.

Thank goodness due to health news and modern research many of us are learning more about the importance of avoiding harmful foods. We understand that certain substances in our foods such as transfats and chemical pesticides can harm us.

At the same time, many of us know that eating healthy is important. The right foods can strengthen your immune system, help you lose weight, and even keep your hair and skin healthy well into your golden years. These are the foods that heal.

By making certain, simple changes to your diet and including foods that heal, you can enjoy better health while drastically reducing the risk for degenerative disease. In the long run, these dietary changes can cut your health care costs and reduce your chances of having to be dependent on medications later in life.

Most of us know what to avoid. The more processed the food, the less nutritious it may be. But, what should we eat? Here is a partial list of foods that heal.

Garlic is one of the most well-known foods that heal. stimulates the immune system and is a known to be anti-viral, anti-fungal and anti-bacterial. In addition it helps your body cleanse by killing parasites and eliminating toxic substances such as lead and zinc. It is being studied by the National Cancer Institute for its anti-tumor properties.

Chili Peppers are known to help keep blood flowing freely which helps lower the risk of heart attack and stroke. They contain a substance called capsaicin, which fights inflammation. It is currently being studied for pain relief such as in arthritis and psoriasis. Many athletes advocate using chili pepper sauce on foods to speed up metabolism.

Ginger is a proven to relieve nausea. It also helps to relieve inflammatory pain and swelling caused from rheumatoid arthritis and osteoarthritis. In Denmark, researchers found that ginger can block the effect of substances that cause inflammation of the brain leading to migraines. Research has also discovered that it has a similar effect as aspirin does on thinning blood clots.

Tea is loaded with polyphenols. These antioxidants have been shown to protect from free radical damage as much as many fruits and vegetables! In addition, a recent study showed that just 2 cups of tea daily may lower the risk of ovarian cancer by 46%.

Fish such as salmon and albacore tuna, are high in omega 3 fatty acids. According to the American Heart Association, these substances have been shown through research to decrease growth rate of arterial plaque, lower blood pressure and decrease the risk of arrhythmias, which can lead to sudden cardiac death.

Asparagus is a great source of glutathione, a powerful antioxidant. Glutathione has been shown to protect against at least thirty carcinogens. 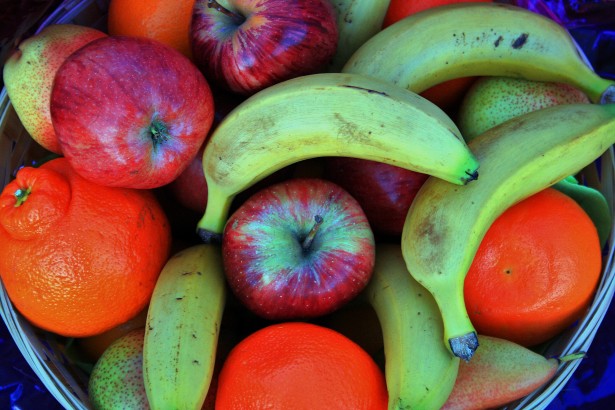 Bananas contain vitamin c, magnesium and potassium and are a good source of fiber. They can strengthen the stomach lining against ulcers and since they are very high in potassium, they can help regulate high blood pressure.

Barley has long been considered a heart medicine in the Middle East. It can reduce cholesterol levels and contains antioxidants that may help prevent cancer. Many people drink the dried barley grass because it is full of vitamins, minerals and protein.

Beans are high in fiber which can reduce cholesterol levels as much as 10 percent. Another powerful side effect of beans is that they help regulate blood-sugar levels.

Bell Pepper are packed with vitamin C, which is known to be a powerful antioxidant.  Vitamin C can help fight colds, asthma, bronchitis, respiratory infections and cataracts, as well as angina, atherosclerosis (damaged, clogged arteries) and even cancer.

Blueberries act as an antibiotic. They can keep infectious bacteria from attaching to the lining of the urinary tract, which helps to prevent urinary tract and bladder infections.

Cinnamon is a strong stimulant for insulin activity therefore it is potentially helpful for those with adult-onset diabetes. In addition, it has been shown to help prevent blood clots.

Dates are high in fiber and full of minerals such as iron, potassium, manganese, phosphorous, copper, magnesium and calcium. They also contain a natural aspirin.

Oats contain a fiber called beta-glucan, which has been proven to lower bad cholesterol levels. It can also stabilize blood-sugar levels and seem to suppress nicotine cravings.

Parsley is rich in antioxidants and can help detoxify carcinogens, including those in tobacco smoke. It is a known to absorb toxins to assist their removal.

Spinach consumption has long been associated with lower rates of cancer. It is a great source of antioxidants, including folate, beta carotene and lutein.

These are just some of the many super foods that heal that are easy to include in your day-to-day health regimen.  The more we learn about nutrition, proactive home health care and other self-care practices, the better chance to avoid the high cost of "health care" deductibles, drugs and more.  Remember that knowledge truly is the best health insurance.

My Name is Cindy and I am an author and holistic and medical researcher,

B.Sci, C.C.T, Holistic Health and Energy Practitioner, and teacher with over 30 years experience. Welcome to my site and thank you for visiting.

[?]Subscribe To This Site
Got questions?
Contact Cindy
FacebookTwitterPinterestTumblrRedditWhatsApp
This site is for educational purposes only - it is not intended to diagnose, cure or treat disease. This information is not intended to replace medical treatment. Copywrite 2017 springclean-cleanse.com