Mucosal plaque is a term used by many holistic health practitioners as well as those who sell colon or body cleanse supplements.  Okay, so this is not a picture of it - but I didn't want to shock anyone.  (That pic will come later.)  So it this stuff that people call plaque fact or fiction?  Is it just psyllium or is it something else?  Read on to learn where this term came from and what it truly is. 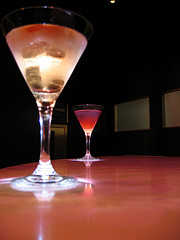 Many skeptics claim the term, mucosal plaque, was first used by Richard Anderson who created the Arise & Shine colon cleanse products.  However, there is no proof this is true, since both words are terms that are somewhat common in both the medical and holistic world. To claim one person put them together for the first time is like saying calcium plaque was a fictional term created by the medical community.  In reality - all terms; mucosal, calcium and plaque are common terminology.  So - how did mucosal and plaque get worded together and become so controversial?

The term may have started to describe a buildup of waste in the small intestine, just as a buildup of waste may accumulate in the arteries.  Since the buildup in the arteries is known as "calcium plaque" to describe an accumulation composed mainly of calcium, it seems logical that "mucosal plaque" would be a term used to describe a buildup in another area composed mainly of mucous.  And we do know that the intestinal tract does have a mucosal lining - and part of your body's defense is to create an excess of this lining to protect you from toxins.  In other words, it is one of your body's natural defense mechanisms.

Much debate goes on to this day about the validity of this waste accumulation in the intestinal tract.  One problem seems to lie in the fact that the term is often used to sell colon cleanse products, which insinuates this buildup occurs in the colon.  In more recent years, colonoscopies are more common and prove there is no waste buildup, or plaque, in the colon.  This may be because the accumulation would be more prone to happen in the small intestine, as by the natural bodily function described above.

The small intestine has a normal mucosal lining that aids the digestive process.  This same lining is also responsible for protecting your body from foreign invaders, such as bacteria, parasite infection and virus.  It even helps to protect from harmful substances such as food additives, dyes, pesticides or other man made pollutants.

Excess mucus in the lining of the small intestine has been known to the medical and scientific community for as long as Cystic Fibrosis has been studied.  (See Resource Below #1-4)  Unfortunately, even though this excess mucosal buildup (called mucus hyperproduction) has been studied and known to be part of the pathology in this particular disease (CF), it has not been studied beyond this point and probably not be unless it happens to be part of another disease study.  This is due to the nature of medicine in which diseases are studied - not "toxicity", fatigue or a general deterioration of health. 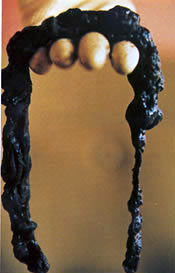 In a perfect world, this protective reaction would happen once in a while, allowing your body time to digest the buildup and eliminate it from your body.  Unfortunately, we live in the modern world where many culprits are added to our food, without our even knowing it.  These may be in our drinking water (sodium fluoride, chlorine, perchlorate) or in produce that have been watered with tap water.  Since it is common, our bodies may have this defensive reaction on a daily basis, throughout the day, allowing no time for your body to remove the waste.

If there is too much mucus released, it builds up and turns into a sludge-like substance.  If overeating is also a habit, then undigested proteins as well as other waste may add to the buildup.  It is the constant adding and building up of this mucosal lining that will eventually turn to what some may refer to as the mucosal plaque buildup.

The unfortunate side of this buildup is that it may add to weight as it may cause metabolism to become sluggish. To make matters worse, if your digestion isn’t working properly and if we aren’t chewing our food, more waste will be added to this buildup in the form of undigested food, and nutrients may not be readily absorbed through the intestinal tract into the blood stream.

Some argue that mucosal plaque is merely a result of taking fiber (such as psyllium) and another supplement call bentonite clay, which is often used during an intensive colon cleanse.  Skeptics claim the black, tarry or rope-like matter released is a mixture of these substances that is evacuated during a body cleanse.

On the other side, proponents claim this cannot be so due to the smell of the waste.  Those who are able to complete a cleanse to get to this point often feel healthier, lose weight or other benefits.

Many holistic health practitioners today agree this defense reaction occurs on a daily basis in the normally healthy individual.  If you feel you have an issue with intestinal mucus buildup, a body cleanse using holistic nutrition may help.  It is your body's natural ability to digest and remove excess mucus, but only when given the help.  Just as your immune system needs nutrients to stay strong, muscles need nutrients to repair and grow and your body needs nutrients as you lose weight, your detoxification and cleansing system needs help, as well.  Following certain body cleansing practices may give your digestion a break, allowing it to break down this waste, naturally.  Here are some tips to help.

I tell my clients to try a colon cleanse for themselves and give it time.  When done correctly, there should be no harm in taking basic cleansing supplements and eating a cleansing diet, which is mainly whole, organic foods.  And think about it, if you add a tablespoon of psyllium and a tablespoon of bentonite clay to water or juice, it will not turn black nor rubbery and the smell simply will not be of tar.

Personally - I avoid "oxygen" cleanse products as they tend to be harsh and not as effective for the average person.  I use fiber to help my body remove any excess intestinal buildup - along with a healthy cleansing diet.

My Name is Cindy and I am an author and holistic and medical researcher, with a
B.Sc. Holistic Nutrition, C.C.T, Cert. Holistic Health Practitioner, Energy Worker and teacher with over 20 years experience working with clients. Welcome to my site and thank you for visiting.